Chandigarh: Foreign Ministers of China and India had a telephonic conversation on Wednesday (June 17) in wake of Monday (June 15)’s incident in which 20 Indian soldiers, including a commanding officer, were killed. Media reports say that there were casualties on Chinese side also but China did not release any information in this regard.

Both China and India have released their versions of talk between Wang Yi (China’s Foreign Minister) and S. Jaishankar (India’s Minister of External Affairs). 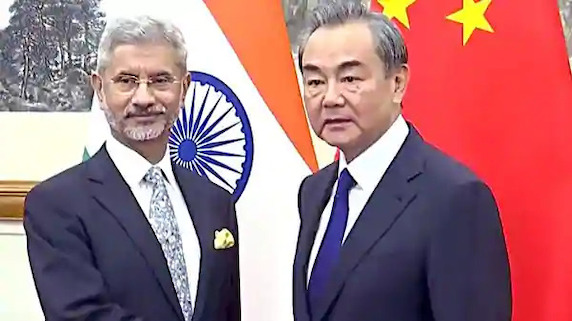 Here is a literal comparison of the two versions:

China: “State Councilor and Foreign Minister Wang Yi suggested that China and India strengthen communication and coordination on properly addressing the border situation and jointly maintain the peace and tranquillity in the border areas”.

India: :The External Affairs Minister and the State Councillor and Foreign Minister of China, H.E. Mr. Wang Yi, had a phone conversation this afternoon on recent developments in Ladakh”.

China: “In a telephone conversation with Indian External Affairs Minister S. Jaishankar on June 17, Wang said that Indian frontline border defense troops on the night of June 15 blatantly broke the consensus reached at the commander-level talks between the militaries of the two sides. Under the circumstance that the current situation in the Galwan Valley has eased, the Indian troops once again crossed the Line of Actual Control for deliberate provocation, and even violently attacked the Chinese officers and soldiers who went to the terrain for negotiation, thus triggering fierce physical conflicts and causing casualties”.

“The hazardous move of the Indian army severely violated the agreement reached between the two countries on the border issue and the basic norms of international relations, he said, while voicing China’s strong opposition to the move of the Indian side”.

“The hazardous move of the Indian army severely violated the agreement reached between the two countries on the border issue and the basic norms of international relations, he said, while voicing China’s strong opposition to the move of the Indian side”.

India: “EAM conveyed the protest of the Government of India in the strongest terms on the violent face-off in Galwan Valley on 15 June 2020. He recalled that at the meeting of senior Military Commanders held on 6th June, an agreement was reached on de-escalation and disengagement along the Line of Actual Control (LAC). Ground commanders were meeting regularly to implement this consensus throughout the last week. While there was some progress, the Chinese side sought to erect a structure in Galwan valley on our side of the LAC. While this became a source of dispute, the Chinese side took pre-meditated and planned action that was directly responsible for the resulting violence and casualties. It reflected an intent to change the facts on ground in violation of all our agreements to not change the status quo”.

What Other Side was told to do?

China: “China demands that India carry out a thorough investigation into the incident, severely punish those who should be held accountable, strictly discipline Indian frontline troops, and immediately stop all provocative actions so as to ensure that such incidents do not happen again, Wang said”.

India: “The need of the hour was for the Chinese side to reassess its actions and take corrective steps. The two sides should scrupulously and sincerely implement the understanding that was reached by the Senior Commanders on 6th June. Troops of both sides should also abide by the bilateral agreements and protocols. They should strictly respect and observe the Line of Actual Control and should not take any unilateral action to alter it”.

China: Wang Yi added that “India must not misjudge the current situation, or underestimate China’s firm will to safeguard its territorial sovereignty”.

India: (No warning or caution, as such, was found in the statement).

On Relations Between the Two Sides:

China: Wang Yi “stressed that China and India, both emerging powers with a population of over 1 billion, bear the historic mission of accelerating their own development and rejuvenation”.

“Hence, acts of mutual respect and mutual support are on the right track and conform to the long-term interests of both countries, whereas those of mutual distrust and friction belong to an evil path and go against the fundamental aspiration of the two peoples, Wang said”.

India: EAM underlined that this unprecedented development will have a serious impact on the bilateral relationship.

On What the Other Side said?

China: “Jaishankar briefed Wang on the stance of India. He expressed the willingness to set out from the overall situation of bilateral relations to carry out with the Chinese side the consensus reached between leaders of both countries to peacefully resolve the situation in the border areas through dialogue.”

India: “The State Councillor and Foreign Minister of China, on his part, conveyed the Chinese position on recent developments”.

On What Was Agreed?:

China: “Both sides agreed to address the serious situation provoked by clashes in the Galwan Valley impartially and abide by the consensus reached at the commander-level talks between the two militaries to cool down the situation at an early date and safeguard the peace and tranquillity in the border areas in accordance with the signed agreement”.

India: “At the conclusion of the discussion, it was agreed that the overall situation would be handled in a responsible manner, and both sides would implement the disengagement understanding of 6 June sincerely. Neither side would take any action to escalate matters and instead, ensure peace and tranquillity as per bilateral agreements and protocols”.