Sikh Genocide and the symbolism of the yellow mustard flower 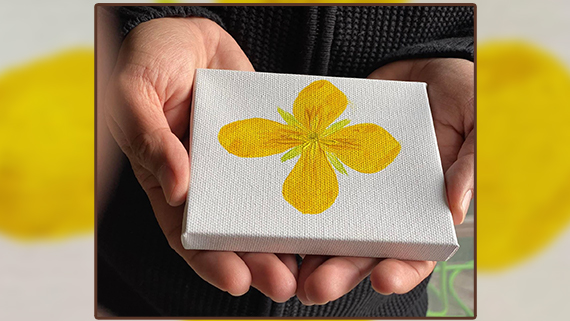 Here is the yellow mustard flower I painted in the remembrance of #SikhGenocide and in the honour of all victims and survivors. We are resilient, moving from victimhood to healing and new beginnings while embracing our history.

Why does the world need Khalistan?

At present, the Sikh community has proven that it symbolizes good among all other religious groups as far as social morality is concerned.

The Punjab Cabinet approved an industrial park near the Mattewara forest range and Sutlej River in the Ludhiana district. The park as per the Cabinet decision was to be set up on approximately 1000 acres and the land of Sekhowal Gram Panchayat (416.1 acres), Salempur Gram Panchayat (27.1 acres) and Sailklan Gram Panchayat (20.3 acres) was acquired for this purpose.

The Sikh Gurus swept clean the disciples' consciousness of all the entangled flimsy and complex cobwebs of mental weavings and spiritualistic vanities of the great and the vainglorious Sanskritic Scholar.

This is a story that never made it to even the inside or insight pages of any newspaper, leave alone an editorial comment. Even the magazines that claim to have an exclusive focus on governance, but essentially carry news about anticipated transfers and postings, did not cover the silent, salient decision taken a few weeks ago by the Narendra Modi government to reduce the effective levels of decision-making in the ministries and departments from five to three.

THE BooK OF THE DISCIPLES – Arjun Dev conceived the idea of enshrining song as the Deity of the new Sikh temple commenced by Guru ...

Arjun Dev was cruelly tortured to death, to the sore affliction of the soul of the whole people. The devotion they bore to their Master was deep and selfless. While they helplef! sly witnessed his cruel death, a curse arose from among them, both against the Moghal Empire and against themselves. Now that He had been tortured, of what use was life? Their prospect was annihilation: acceptance of which meant the eventual disappearance from this earth of the type of spiritual humanity created by the Master; resistance to which meant sorrow, suffering, hunger, and death for themselves and their children-but, so great was the love of the people for their true king, that all these ills must be endured.

Remembering Justice Ajit Singh Bains, Steadfast in His Integrity, Friend to the Downtrodden

Justice Bains came from a family which had a long tradition of participating in anti-imperialist activities. His father G.S. Bains was active in the Communist Party of India (Marxist) and was associated with the editing of the party paper.

In 1946, Amrit Kaur sent her son, Ajit, away from their houseful of Leftist revolutionaries at Mahilpur village in Hoshiarpur to study law in Lucknow. She worried he might be arrested by the British government before he had even started his life. The young man would become a respected Justice of the Punjab and Haryana high court, retire in 1984, and become the ‘people’s judge’ of Punjab’s countryside during

Ramdas had selected a solitary place shaded by Acacia trees, part of the gift of land made by the Emperor Akbar, and at the bidding of Amardas, had laid there the foundation of a new colony of disciples.

This presentation is based on audioarticle of a writeup penned by Sikh Siyasat editor Parmjeet Singh Gazi.

Media are the collective communication outlets or tools used to store and deliver information or data. Social media are interactive computer based algorithms that facilitate the creation and sharing of information, ideas & other forms of expression via virtual networks.

The question remains unanswered and is haunting. There is no definite answer on how to shape the future of agriculture. The only solution in discussion in Punjab is crop diversification which is a small part of this complex problem. The identification of a problem is more indispensable before suggesting solutions. Do you remember the famous green revolution? Yes, the one famously talked about increasing the grain yield in the late 1960s in the region.

The documentary starts with the quote of Martin Luther King Jr., “In the End, we will remember not the words of our enemies, but the silence of our friends.”

It is generally asserted that the first five Sikh Gurus, up to Guru Arjan (1563-1606), were opposed to individual participation in war, and to war as a measure of national policy, and that it was the persecution of Guru Arjan by the Mughal Emperor Jebangir which obliged the Sikh movement to diverge from its true doctrine of pacifism.

After the passing of Har Gobind a calm ensued, for the Sikhs were, by nature, peace-loving and fond of celestial contemplation, and the Guru's residence was now permanently shifted from Amritsar to Kiratpur-an out of the way, inaccessible ~lace. Besides, Emperor Shah Jehan had seen, during the lifetime of Har Gobind, that it served no good purpose to make the Sikhs his enemies. On the illness of Dara Shikoh, his youngest and most beloved son,

The child Har Krishan, the younger son of Har Rai had developed those mystic signs by which the Master was always recognized. The very Darshanam of Har Krishan healed the sick and comforted the miserable. Har Rai bowed down to this child as to Guru Nanak, and left the earth.