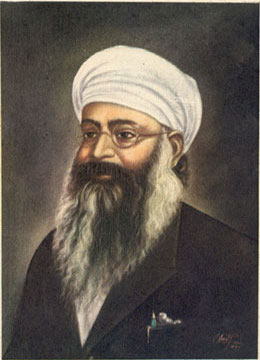 The Sikh Gurus swept clean the disciples’ consciousness of all the entangled flimsy and complex cobwebs of mental weavings and spiritualistic vanities of the great and the vainglorious Sanskritic Scholar.

When Sikhism came to the Punjab, Brahminism interpreted it as its off-spring with a view to holding it in its tentacles. And merely because Nanak’s mother-tongue was Punjabi, and his theological language of the Hindus, the Guru’s wholly original outlook on life was not understood.

Guru Nanak’s genius wasted no time in inventing a new language; the very touch of his genius would make any language new and great. He sang out his soul in whatever language came nearest to him.

It is foolish to make linguistic niceties the pivots of any great and original expression. Guru Nanak adopted a colloquial sort of Persian to speak to the Persians, a sort of Prakrit and Gatha language to the those who knew Sanskrit. To Mussalmans he spoke in the theological system of Alquran, to the Hindus in that of the Puranas. Assuredly he was nowhere, any time, identified with their speculation. His message shines through the images of all languages.

A great architect does not bring his bricks and mortar from Heaven; his mind only he brings. It is the art of the artist that truly brings him to have directly, soul to soul, not the knowledge of the chemical composition of his plaster of Paris or marble or colours, or the shape of his chisel or brush, or pen.

In the Case of a genius, it is his creation that gives meaning to him, not the language he speaks or the country he is born in. He transcends all geographical limits of blood and caste and colour, both of body and mind.

To a master, the very mud of the street would furnish material to paint his masterpiece, while to a lesser man the quest of the choice of colour and brushes would become an unending pastime. 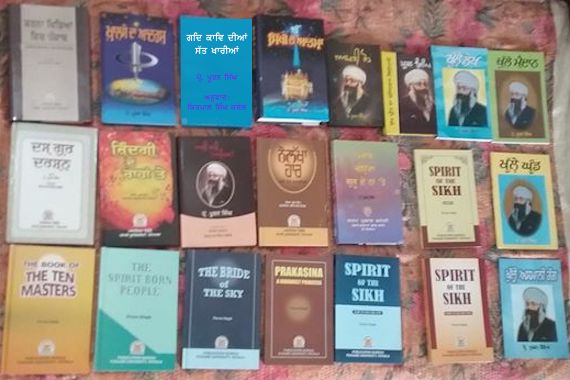 Buy a special collection of 22 Books by Prof. Puran Singh (in English and Punjabi)

Guru Nanak had no time to waste on writing lexicons for giving a right interpretation to his song. A true song is its own interpretation; the beautiful face has its own language in which it speaks to all. Beauty is beauty, even if it knows no language of this earth. Its broken accents are pure music. And to interpret him by lexicons is weariness of flesh. The only right interpretation is the character his song had created, and even though one such creation dies, the infinite creativeness of his song lives. His sustaining song is an immortal Person, capable in its own hour to make the very rocks move to great actions.

There is the portrait of his God, painted in that flash-like height of Sikh history. And the meaning of his word is there in the face that shines on the created page, not in the street mud of the language and philosophic generalities that he put on his brush to paint it with. It is with an eye to this great creation and perpetual creativeness of the master that Cunningham, of all persons has been able to differentiate Sikhism from Brahminism. He could do so because he mixed intimately with the Sikh people and studied their history with personal sympathy. He brought a fresh, unbiased, free western mind to bear upon it and it was left for the western mind to see the grandeur of Guru Nanak’s message.

It is to be regretted that Sikh and Hindu scholars are interpreting Guru Nanak in the futile terms of the colour he used, the brush he took; are analysing the skin and flesh of his words and dissecting texts to find the Guru’s meaning to be the same as of the Vedas and Upanishads! This indicates enslavement to the power of Brahminical tradition. Dead words are used to interpret the fire of the Master’s soul ! The results are always grotesque and clumsy translations which have no meaning at all. Macauliffe’s almost schoolboy-like literal rendering into English, following possibly the interpretations given him by the Brahminical type of gyanies, the unillumined theologians who lacked both the fire of inspiration, and the modern mental equipment and who were decayed and eaten up by the inner fungus of the Brahminical mentality, has made the live faith of the Sikh a dead carcase. It has produced neither the beautiful artistic colour of the idol and the shrine, nor the fervour of the inspiration of love. And from his translators, one thinks Sikhism is weak Brahminism. Much that is redundant is put before a world-audience, without the light that made every straw and every little dust particle, every petty detail even, radiant and beautiful. The purple cloud in the sky thrown by nature behind the green trembling branches of a high sheeshum tree, like the wings of a huge bird shaking drops of water away, makes of the little tree on earth more a dream of beauty than merely a tree! If however, the cloud is not there and the rainy season of the hot months is not on, it is but a tree, all the charm surrounding it gone. Beauty when deprived of its vital redundancies seems to lose its very soul.

The Master who has attracted a whole people, men, women, and children, and has poured his love and song into their souls; the Master round whom they still go in endless worship is seated there amidst them in their souls. The Guru is the very pole-star with a whole number of stars of the Sikh life going round him. And the people still sing and have been singing in maddening rhythm of soul for centuries now—the Name of Guru Nanak. Ignoring this living spectacle of four centuries and more, the pedestrian scholar closes himself in his room and interprets these songs of the people by the aid of Sanskrit lexicons and English dictionaries! It is the personal passion for the Guru, it is the infinite self-sacrifice of man invoked by this inspiration of love, which truly can interpret the Guru’s song. Music of life can have no meaning to one who aches not to it. Mere thinking is an obstacle the devotees cross all frontiers to meet Him.

The above article was first published on Aug 07 2017