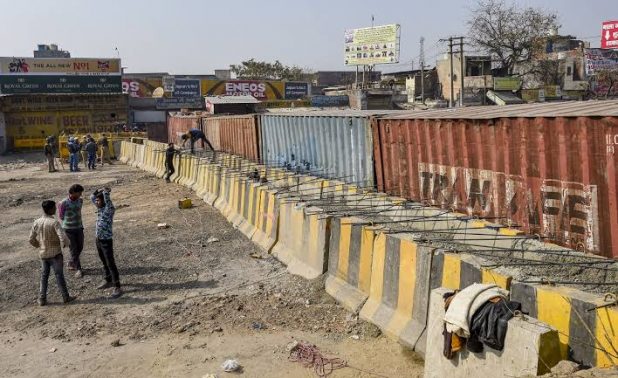 Reports are eminating from Singhu Border Farmers Protest that a person was caught by Nihang Singhs while he was trying to commit Beadbi of Guru Sahib. He reportedly confessed before Nihang Singhs that he was told by some elements to do so and he was to be paid by them.

The Image of Sikh Struggle Cannot Be Blurred With Accusations : Bhai Mandhir Singh at Dallewal

An annual Shahaeedi Samagam in the memory of Shaheed Bhai Satpal Singh Dallewal was held on 14 September 2021. Speaking during the samagam Bhai Mandhir Singh (Panth Sewak Jatha Doaba) said that the image Sikh struggle cannot be blurred with accusations.

A person was apprehended by sewadars at Takht Kesgarh Sahib in Anandpur Sahib after he smoke and threw biri/cigarette bud inside the Takht Sahib. The culprit who was identified as Paramjit Singh of Mohalla Maharaj Nagar of Ludhiana was handed over to the police. Police have registered FIR No. 122 (PS Anandpur Sahib) under section 295A of Indian Penal Code (IPC).

Naga People's Movement For Human Rights (NPMHR) held a conference at Delhi on 4 September 2021. Sharing concerns of the organisers about the ongoing talks between representatives of Naga nation and the Indian state, and expressing solidarity with Naga people and their struggle, Parmjeet Singh (editor, Sikh Siaysat) said that as Sikhs, we were duty bound to stand with the Naga nation.

Can Horticulture Be An Option For Punjab’s Troubled Agriculture? Interview with Hardial S. Gharyala

Punjab's agriculture is in dire crisis and to overcome this, Punjab needs to diversify from rice-paddy crop cycle that has drained its' natural resources. A team of Agriculture and Environment Awareness Centre met S. Hardial Singh Gharyala, former deputy director of Horticulture in Punjab.

Young Couple Return To Punjab To Connect To The Roots; Engage in Organic Farming At Native Village

This is video recording of speech of Bhai Mandhir Singh during Shaheedi Samagam at village Budh Singh Wala on 29 July 2021. In this speech he talked about the legacy of Sikh struggle and the present situation.

The SGPC appointed acting Jathedar and his staff at Akal Takht Sahib released a document titled "Contemporary Sikh Concerns and Priorities" (CSCP) that outlined Policy Directions and Institution building for the Sikhs on June 3rd 2021 to a large chosen batch.

In June 1984 the Indian state launched armed attack on Sikhs and targeted Sikh Gurdwaras across Punjab and adjoining state. A new book penned by ...

International Association of Genocide Scholars (IAGS) is going to hold IAGS 2021 Conference from 18 to 23 July at University of Barcelona. A session on Sikh genocide will also be hosted during this conference, which will be attended by genocide scholars, academicians, researchers and human rights activists from across the globe.

Sikh Siyasat’s Facebook Page Blocked in India Without Any Intimation

THE CHILD NANAK – He came like a song of Heaven, and began singing as he felt the touch of the breez and saw the ...

Why India Attacked Sikhs in June 1984? What Were Reasons Behind 1984 Attacks on Sikhs?

In June 1984, Indian forces attacked Darbar Sahib, Amritsar and other Sikh Gurdwaras in Punjab and adjoining states. Speaking at a Shaheedi Samagam on ...

How to Understand Ghallughara June 1984? What Were Real Reasons Behind the Army Attack?

A memorial samagam was held at Gurdwara Shaheed Ganj, Mushiana Sahib, Mullanpur (Ludhiana) on 3 June 2021 in the memory of Shaheeds of Ghallughara June ...

Agriculture and Environment Center is calling for paddy reduction in Punjab in order save ground water. The Center is holding Water Awareness March and meeting environmentalists, agriculture experts and successful farmers practicing natural farming, or using farming techniques which save water.

Bhai Mandhir Singh, one of the directors of Agriculture and Environment Center, said that Jal Chetna Yatra will start on 7th of June from Darbar Sahib, Sri Amritsar. No end date is announced for conclusion of the Yatra. He said that if restrictions on gatherings etc. are lifted then a Jal Panchayat (Water Assembly) could be organized after the conclusion of this yatra.

S P Singh is a se­nior jour­nal­ist who knows where the shoe pinches but has­n’t mus­tered up enough courage to hurl one at so many ...

The Image of Sikh Struggle Cannot Be Blurred With Accusations : Bhai Mandhir Singh at Dallewal