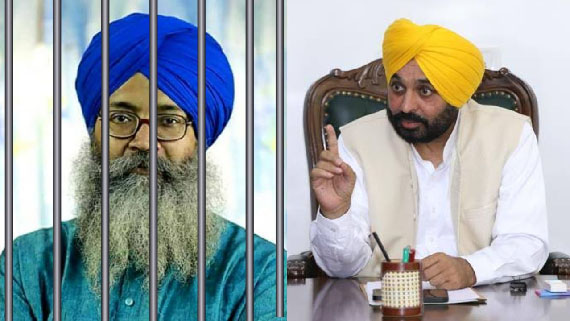 A recently released report has recommend revocation of "sole, exclusive and absolute" rights of PTC Network over Gurbani broadcast from Sri Harmandar Sahib, Sri Amritsar. The report says that no single channel or network can establish monopoly over Gurbani broadcast as Gurbani is Sarab-Sanjhai (common) and there should be a Sangati (community based) broadcasting system.

On 28th February, Sikh Siyasat News remembers Bahujan activist Dina Bhana, as this day marks his birth anniversary. We are sharing a brief biography of Dina Bhana in audio podcast format. This podcast is based on a write-up penned by Inderpreet Singh Sangrur.

Being the geostrategic link to East Asia, central Asia and south Asia, events in Afghanistan usually have ramifications that go much beyond its political boundaries. ...

At least four Sikhs have been killed in a mass shooting at a FedEx company facility in Indianapolis by a 19-year-old former employee, according to the Sikh Coalition.

Clashes between the Myanmar security forces and regional armed groups, which have involved military airstrikes, have reportedly claimed the lives of at least 17 civilians in several parts of the country, the UN Office for Coordination of Humanitarian Affairs (OCHA) said on Wednesday.

The National Investigation Agency (NIA) of India has issued notices to various activists and relatives of some others in relation to a case registered under Unlawful Activities Prevention Act (UAPA).

The All Party Parliamentary Group (APPG) for British Sikhs will be sending a joint letter signed by dozens of MPs with large numbers of Sikh constituents to the Foreign Secretary following the virtual lobby yesterday.

Which Canada MPs are Speaking About Issues Important to Sikhs?

Chandigarh –  The World Sikh Organization of Canada has examined key issues with respect to Sikhs in the Parliament of Canada from January 2018 until ...

What does a controversial report authored by a retired CBC journalist have to do with a right-wing think tank that promotes trade with India and a global consulting firm run by former Prime Minister Stephen Harper?

The tactics adopted by National Investigation Agency (NIA) of India are once again under question after a witness questioned by NIA dies under mysterious circumstances. This is second such death in Punjab which is linked with NIA's ongoing investigations. Earlier a witness named Rampal had committed suicide in 2018.

The March 25, 2020 massacre of Sikhs at Gurdwara Har Rai Sahib in Kabul, Afghanistan sent shockwaves through the global Sikh community, yet the violence was not the only shocking thing about the vicious attack.

The Kashmiris from across the Line of Control and the world over including the Tehreek-e-Hurriyet Jammu and Kashmir Chairman Muhammad Ashraf Sehrai and the All Parties Hurriyat Conference have strongly condemned an attack on a Sikh temple in the United Kingdom and have expressed solidarity with the Sikh community.

The Sikh Siyasat News (SNS) has released an audiobook version of Rana Ayyub’s book Gujarat Files. The audiobook is in Punjabi language and it's released on Sikh Siyasat’s iOS and Android app.