Chandigarh: Sangrur MP Bhagwant Mann is reportedly appointed as ‘president’ of the Aam Aadmi Party’s Punjab unit. The comedian turned politician Bhagwant Mann is known for his alleged ‘drinking’ habit. Aman Arora, MLA from Sunam, has been made vice-president.

The decision was reportedly taken during a meeting of the party’s top leaders with Punjab MLAs and other leaders. The meeting was chaired by Arvind Kejriwal, AAP’s central convener and the Delhi chief minister.

The decision to appoint Bhagwant Mann as new ‘president’ of Punjab unit of AAP was announced by Arvind Kejriwal after he claimed a majority view in favour of Bhagwant Mann following one-on-one meetings with the MLAs. 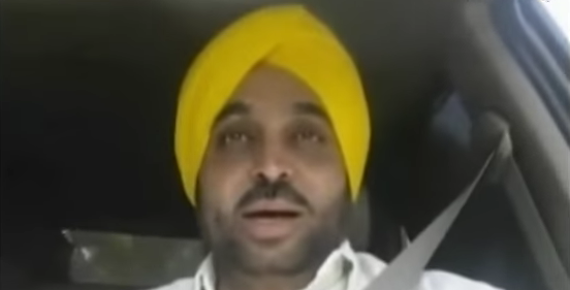 Media reports suggest that appointment of Bhagwant Mann as president of Punjab unit would invite more trouble for the party which experienced ‘deep shock’ after ‘defeat’ in Punjab elections 2017.

“In reaction, the party’s chief whip in the Punjab assembly, Sukhpal Singh Khaira, quit his post despite Kejriwal’s asking him to continue. Mann replaces Gurpreet Singh Waraich ‘Ghuggi’, also a comedian-turned-politician, who is reported to be upset with his unceremonious removal”, notes the Hindustan Times.

“The party could have told me to resign over telephone. Why this lengthy exercise?” Gurpreet Ghuggi reportedly said after the meeting.