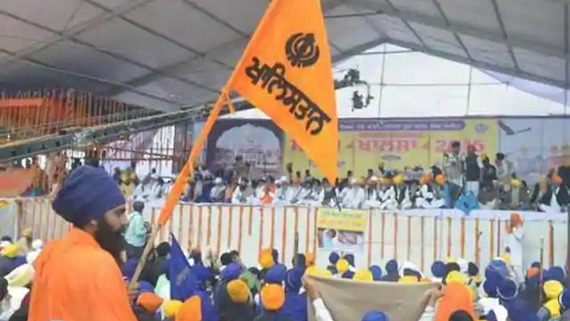 On September 9, 2020 Canada based Macdonald-Laurier Institute released a paper titled "Khalistan: A Project of Pakistan" by Terry Milewski. BC Gurdwaras Council and Ontario Gurdwaras Committee has issued a statement in response to this paper, terming it as part of Indian state's propaganda against the Sikh Sangarsh.

The Delhi police personnel were complicit and an active participant in the violence that took place in Delhi in February 2020, yet in the last six months not a single investigation has been opened into the human rights violations committed by the Delhi police - before, during and after the violence, said Amnesty International India on Friday (August 28) as it released a new investigative briefing.

Foreign Ministers of China and India had a telephonic conversation on Wednesday (June 17) in wake of Monday (June 15)’s incident in which 20 Indian soldiers, including a commanding officer, were killed. Media reports say that there were casualties on Chinese side also but China did not release any information in this regard.

Government of India (GoI)'s Union Ministry of Home Affairs (MHA) issued new guidelines to fight COVID-19 and for phased re-opening of areas outside the Containment Zones, yesterday (May 30).

In a press release issued today, the Punjab government said that it has collected more than Rs. 1 Crore as fines from people who were not wearing masks that have been made mandatory by the government in wake of COVID-19.

Sidhu Moosewala Still on the Run to Escape Arrest; 4 Cops Apply for their Anticipatory Bail

Four of the five cops, booked by the Sangrur and Barnala police involving use of arms, including an AK-47 rifle, by singer Sidhu Moosewala have now applied for anticipatory bail before a Sangrur court. Meanwhile Sidhu Moosewala still remains on the run.

Sidhu Moosewala was booked in two cases for firing at a police at two different places earlier this month. He was accompanied by Punjab police officials who had unauthorisedly arranged shooting practise for him.

Controversy surrounding Satnam Singh Kaler’s move to appear in court for defending Sumedh Saini refuses to die down even after he announced his withdrawal from the case.

Under Fire, Sumedh Saini’s Lawyer Steps Back From Defending Ex-DGP

A court of additional sessions judge here today heard the anticipatory bail plea of former Punjab police chief Sumedh Saini and fixed May 11 for next date of hearing in this matter.

Sumedh Saini on the Run After FIR in Enforced Disappearance Case; Denied Entry in HP

It is learnt that the Punjab Police have registered a criminal case against former DGP Sumedh Saini in connection with the disappearance of Balwant Singh Multani in 1991.

District Deputy Commissioners office invited strong condemnation after it issued an order saying that announcements of home delivery of liquor from loudspeakers of 'religious places'. As religious places includes Sikh Gurdwara Sahibs, the order was strongly criticised by Sikh netizens.

The Sikh organization, Dal Khalsa has written an open letter to all parliamentarians of India expressing serious concerns over the sudden surge in the cases against lawyers, journalists, student activists and rights defenders under draconian laws called sedition and UAPA.

The Punjab government announced to relax Covid-19 lockdown in the state. The state government has announced to allow limited movement for all from 7 am to 11 am. Announcing this CM Amarinder Singh cautioned against unnecessary gatherings.

Dal Khalsa has observed that the press freedom is under seize in Kashmir as three journalists namely Masrat Zehra, Peerzada, Gowhar Geelani have been booked under draconian law UAPA in the last 48 hours.

Significant Results Achieved with Support of US Sikhs and Gurdwaras: SCCED & AGPC

With a long executive ministerial experience at the Central Government P. Chidambaram sums up the present coronavirus-created situation: “The poor have been left to fend for themselves for 21-19 (40) days.

Sikh Intellectuals and Civil Rights activists today expressed their dismay that the government has been tackling a disease related social problem of coronavirus at the level of fighting a ‘war’ by imposing top-down strict curfew showing no compassion to the people already suffering a fear psychosis of the pandemic.

Why India Attacked Sikhs in June 1984? What Were Reasons Behind 1984 Attacks on Sikhs?

How to Understand Ghallughara June 1984? What Were Real Reasons Behind the Army Attack?