Anandpur Sahib: A person was apprehended by sewadars at Takht Kesgarh Sahib in Anandpur Sahib after he smoke and threw biri/cigarette bud inside the Takht Sahib. The culprit who was identified as Paramjit Singh of Mohalla Maharaj Nagar of Ludhiana was handed over to the police. Police have registered FIR No. 122 (PS Anandpur Sahib) under section 295A of Indian Penal Code (IPC). 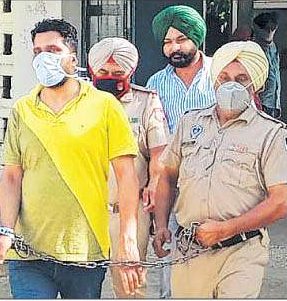 Culprit of Beadbi in police custody

SGPC appointed acting Jathedar of Akal Takht Sahib, Giani Harpreet Singh, today said in a video message that the culprit has deep links with Dera Sauda Sirsa and its’ jailed chief Gurmeet Ram Rahim. He said the culprit is son of a member of central committee of Dera Sauda Sirsa (DSS) and he, himself, is a staunch supporter of Gurmeet Ram Rahim who is undergoing imprisonment for life in rape and murder cases.

A news report in a Punjabi vernacular Ajit notes that accused Paramjit is also facing a case related to an incident of forcible possession at a Gurdwara Sahib in village Khadd Rajgiri under police station Noorpur Bedi. He, along with others, was booked under FIR number 184 under section 323, 447, 448, 148, 149, 506, 120B IPC and under some sections of Arms Act in related to Khadd Rajgiri incident that took place on 24 September 2020.

Giani Raghbir Singh, SGPC appointed jathedar of Takht Kesgarh Sahib said that a five member co-ordination committee is setup to coordinate with the police regarding investigation of this case.