Amritsar: As farmers’ dharna on the Amritsar-Delhi railway tacks completed 14 days on Wednesday, many protesters recalled how they had sat at the same track for seven weeks in 2016 to push state government to pursue better marketing of Punjab Basmati in Iran and other middle eastern countries. They also rued that due to diplomatic reasons, Punjab was not able to fully realise the potential of trading its agri-products through the Wagah border.

India was first to impose 200 per cent excise duty over import of Pakistani goods via Attari-Wagha border after Pulwama attack in February 2019. Following this, Pakistan put a blanket ban over the import from India via Wahga border after removal of special status for J&K in August 2019.

“The government has blocked all the trade opportunities that Punjab has due to its geographical position. Punjabi farmers have great opportunity to sell their crops in Pakistan and middle east via Wahga border. But Punjabi farmers were never allowed to explore these opportunities. And now they are threatening to take away the granted MSP for wheat and paddy. Wheat, paddy and other crops produced by Punjabi farmers can never be a burden for the Indian government to purchase because these crops have very good market in the Pakistan, Iran and middle east countries for which Whgah border should be opened. But international diplomacy has been hurting the interest of Punjabi farmers. Government should open Wagha border before pushing farmers into open market,” said Sawarn Singh Pandher, general secretary, Kisan Mazdoor Sangarsh Committee, Punjab. 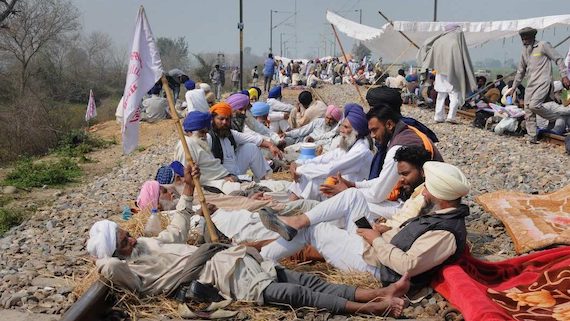 While protests over farm laws rage in Punjab, Pakistan has ordered 20 lakh tonnes of wheat from Russia. Many protesting farmers said that this was an opportunity missed for India in general and Punjab in particular.

“Food inflation often makes headlines in Pakistan. They are importing wheat from Russia. They had tomato crisis last year. Union government would have earned good profit from the food market in Pakistan. But Wagah border is closed. Wings of traders are crippled, but the talk is of selling in open market. This is joke,” said Punjab PHD chamber chairman R R Sachdeva, who met Union government’s 15th Finance Commission members during their visit to Amritsar in 2019 and asked them to allow Punjab to do trade with Pakistan.

About the 2016 rail roko, farmers said that at that time the then Punjab government had promised farmers that it would form a high-level committee to visit Iran to explore options to sell Punjab Basmati there. The protest that year was triggered due to sharp fall in prices of Basmati in the open market, forcing the government to pick Basmati at paddy MSP. Unlike paddy, Basmati is not procured over MSP.

“The committee had to visit Iran to study the demand and policies of Basmati in the Iran and the other middle east counties. At that time too, there was a feeling among farmers of Mahja that one of the prime reason behind the low prices of Basmati was that Modi government’s spoiled relations with Iran,” said Satnam Singh Ajnala, leader of Jamhoori Kisan Sabha.

“This year again, Basmati is being procured in the open market at less than paddy MSP which is above Rs 1,850. Basmati has being procured at Rs 1700. Despite the promise in 2016, Punjab government did nothing to explore the opportunities for farmers in Iran or middle east. Basmati farmers are back to square one again. Now you can understand shallowness in the claims of central government about more profit to farmers after market would be open,” said Sawarn Singh Pandher, general secretary, Kisan Mazdoor Sangarsh Committee Punjab.

* Note: Above news report was originally published by The Indian Express under title: “At rail roko in Amritsar, farmers rue Wagah trade falling off govt policy charts” by “Kamaldeep Singh Brar” at source url: “https://indianexpress.com/article/india/at-rail-roko-in-amritsar-farmers-rue-wagah-trade-falling-off-govt-policy-charts-6715433/“. It is reproduced above for the information of readers of the Sikh Siyasat News.