Chandigarh: Escalation of border dispute between China and India in Ladakh is on the rise since past few weeks. Chinese and Indian troops have been engaged in aggressive posturing at Pangong Tso lake, Galwan Valley, Demchok and Daulat Beg Oldi for the past three weeks.

Violent Face-offs of May 5 and May 9:

Chinese and Indian soldiers were engaged in a violent face-off on the evening of May 5 which spilled over to the next day before the two sides agreed to “disengage” following a meeting at the level of local commanders. 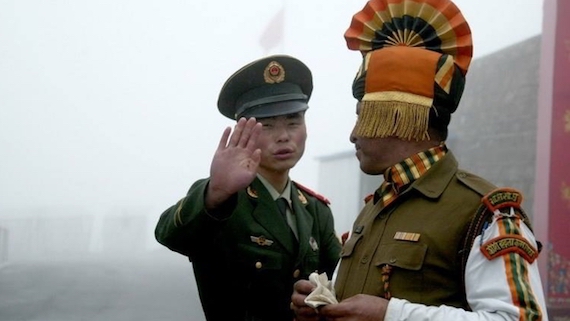 Over 100 Indian and Chinese soldiers were injured in the violence. The trigger for the incident was China’s strong objection to the road being laid by India in the Finger area in Pangong Tso lake.

Since the face-offs of May 5 and May 9, Chinese military has increased its strength in Pangong Tso lake, Galwan Valley, Demchok and Daulat Beg Oldi, and resorting to “aggressive patrolling” in these areas.

Media reports note that the Indian Army is also carrying out similar exercise in the region.

According to a news report by NDTV, “Satellite images show massive construction activity at a high altitude Chinese air base, located just 200 kilometres away from the Pangong Lake, the site of the skirmish between forces of India and China on May 5 and May 6”.

“Two images, exclusively sourced from the open source intelligence expert detresfa_ , an analyst with ShadowBreak Intl., show the Ngari Gunsa airport in Tibet. The first image is dated April 6, 2020 while the second one, dated May 21, this year, shows massive construction activity including the addition of what appears to be a second taxi-track or a secondary tarmac to position helicopters or combat aircraft. A third image shows a close-up of the main tarmac at the airport with a line-up of four fighter jets believed to be either J-11 or J-16 fighters of the Chinese People’s Liberation Army Air Force”,  the report reads.

A write-up by Seema Sirohi, published in Economic Times, maintains that “Hundreds of Chinese soldiers are 3-4 km into India’s side of the line of actual control (LoAC) in Ladakh’s Galwan Valley with heavy vehicles. They are said to be building bunkers”.

As per reports, five meetings have taken place between local commanders of China and India, but these meetings failed in restoring the status quo.

The only two statements from China’s Ministry of Foreign Affairs (MFA), on May 19 and May 22, were issued to the Indian media in responses to queries. Unlike in the past, these were neither published on its website nor circulated to the Chinese media.

The MFA also answered a question in its daily briefing on May 21 on comments made by U.S. diplomat Alice Wells on the border situations, describing it as “nonsense”. The spokesperson repeated the May 19 statement and added it had “nothing to do with the U.S.”

As of May 26, there has been little coverage on the border in Chinese media, another contrast from 2017 when there was almost daily coverage on Doklam in what was a campaign by State-controlled media to whip up public sentiment.

Reports suggest that China is taking an aggressive posture on the ground this time.

As the reports about border stand-off initially broke in, the Indian side tried to downplay it. During this time China (on May 19) accused India of intruding into Chinese territory and blocking normal patrols and attempting to unilaterally change the status quo.

Another statement on May 22 said that with the border never having been demarcated, problems occurred on occasion. It said China opposed infringements across the border.

By the time the Government of India finally dismissed China’s assertions/accusations the PLA had reportedly entered 3-4 kms deep into territory which Indian side claims to fall under Indian side of the LAC. They are also building bunkers there. According to a write-up by P. Stobdan in the Indian Express Chinese military has “disrupted normal patrolling by Indian soldiers, and destroyed posts and bridges on the Galwan Nala at Chang-Chenmo”.

In the midst of escalating border tension between Indian and Chinese troops in eastern Ladakh, Indian PM Narendra Modi on Tuesday (May 26) held a meeting with National Security Adviser Ajit Doval, Chief of Defence Staff General Bipin Rawat and the three service chiefs “with a focus on bolstering India’s military preparedness to deal with external security challenges”.

A report in Times of India (ToI) notes: “[t]he meeting came hours after the top four generals briefed Defence Minister Rajnath Singh about the situation in Pangong Tso lake, Galwan Valley, Demchok and Daulat Beg Oldi where the Indian and Chinese troops were engaged in aggressive posturing for the last 20 days”.

“People in the military establishment said the Prime Minister was briefed about the situation in Ladakh. There was no official comment or details available about the meeting”, the news report notes further.

China’s Response to Abrogation of Article 370 & Change in Status of Ladakh was Noteworthy:

Notably, China had issued a strong strategic response when the Modi government abrogated Article 370 of the Indian Constitution and changed the status of the erstwhile state of Jammu and Kashmir.

China’s response was clearly in two parts- one was related to the territory of Jammu and Kashmir valley etc. and the other was related to Ladakh, and it was the later part that was considered to be a strategic assertion.

There was a strong outburst from Beijing over making Ladakh a Union Territory (UT). China described India’s move as “unacceptable”, undermining its “sovereignty” — even raised the issue at the UNSC. (READ FULL).

Indian side had rejected the Chinese response saying that Ladakh’s new status was an “internal matter” having “no implication for India’s external boundaries or the LAC with China”.

India’s rejection of the Chinese response was on traditional lines, but as the recent developments show, China’s assertions were considered and strategic  which may have a lasting imprint on geopolitics.