A PressProgress report has probed into “Why did the Macdonald-Laurier Institute publish a controversial report authored by retired CBC journalist Terry Milewski?”. This report was originally published under title “Right-Wing Think Tank Accused of Demonizing Sikh-Canadians Also Works to Send Canadian Oil to India” at source url – “https://pressprogress.ca/right-wing-think-tank-accused-of-demonizing-sikh-canadians-also-works-to-send-canadian-oil-to-india/“. It is being reproduced for the information of readers of Sikh Siyasat News (SSN).

What does a controversial report authored by a retired CBC journalist have to do with a right-wing think tank that promotes trade with India and a global consulting firm run by former Prime Minister Stephen Harper?

Oil, among other things.

Terry Milewski recently raised eyebrows after publishing a report in a somewhat untraditional venue for a former CBC journalist: The Macdonald-Laurier Institute, a right-wing, business-friendly think tank based in Ottawa.

MLI promotes “liberty” and “markets.” It is partnered with the Atlas Network, a global network of right-wing think tanks and advocacy groups largely funded by conservative mega-donors, including billionaires Charles and David Koch.

At first blush, a report on separatist movements in India may seem like an unusual topic for a Canadian free market think tank to explore.

MLI’s report, titled “Khalistan: A Project of Pakistan,” alleges a Sikh movement that wishes to separate from India was actually “designed” by Pakistan in order to “subvert the national security of both Canada and India.”

MLI points to a retracted government report to support its national security claim, but many Sikh-Canadians say it only creates “paranoia” about their community.

MLI’s report was roundly condemned in a letter penned by 50 top Sikh academics, who argue the report “damages the credibility of the Macdonald-Laurier Institute as it lacks adequate academic rigour, historical and contextually-based journalistic analysis and balance.”

In response to the recent @MLInstitute report on the Khalistan Movement by @CBCTerry, @shuvmajumdar & @ujjaldosanjh, a team of 50 Sikh Scholars from leading institutions in Canada, USA & UK have written an unprecedented response criticizing the damaging nature of the report. pic.twitter.com/pOmPTwCJ5b

They say it also “casts wide aspersions on a highly visible, racialized community” and “maligns all Sikh-Canadians engaging in advocacy as extremist and foreign-influenced actors.”

Dr. Harjeet Grewal, a University of Calgary Sikh Studies instructor and a signatory to the letter, said this “imbalanced portrayal” is deeply hurtful to his community.

“Their perception of this report is an extension of their experience of Canadian society, of being brow-beaten, of bullying,” Grewal told PressProgress. He said that it casts aside “deep wounds in the community” and “hits social triggers in deep ways.”

MLI later issued a response dismissing concerns raised by the Sikh academics as a “campaign attempting to silence the Institute” and reiterated that “the Institute stands by Mr. Milewski’s report.”

Milewski’s interest in the topic is long-standing and well-known: While he has long been an advocate for victims of the 1985 Air India bombing, many Canadian Sikhs complain his focus on their community is outdated and simplistic.

What remains less obvious is why MLI asked Milewski to write a report on a topic seemingly unrelated to their main focus.

“They asked me to write an article, and I did,” Milewski told PressProgress. “There really isn’t much of a backstory to offer — certainly not an interesting one.”

“Nobody strategized about how it might look,” he said, adding he’s “rather baffled” there is any “interest in the mechanics of how it came to the market.”

According to MLI, they invited Milewski to write the report because they felt Canada’s relationship with India is in the “national interest.”

“Given that Canada’s response to such extremism remains a challenge for the Canada-India relationship, this topic is in the national interest and is therefore within the scope of what MLI is interested in discussing,” MLI spokesperson Brett Byers told PressProgress.

“This report is part of a much broader body of work that argues that Canada should advocate for a free and open Indo-Pacific,” Byers explained. “This report comments on Khalistani extremism and its ties to Pakistan, which is a sticking point in the broader Canada-India relationship.”

“Forging closer ties with India is something that is in Canada’s national interest.”

And that’s become a top priority for MLI lately.

The think tank’s 2020 fundraising dinner was titled “The Indo-Pacific: Crucible of the New World Order” and featured speakers advocating more trade between Canada and India.

That event was sponsored by Canadian Natural Resources Ltd, a major oil producer. During the event’s “sponsor remarks,” one CNRL executive stressed the importance of “getting Canadian oil and gas onto global markets” — including India. 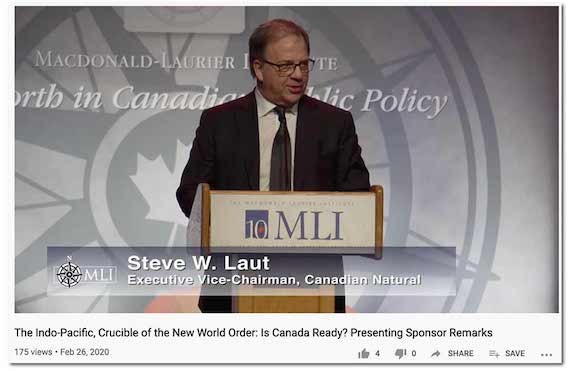 CNRL’s executive was introduced by Shuvaloy Majumdar, MLI’s Program Director for the “Centre for Advancing Canada’s Interests Abroad” and a key architect of the think tank’s “Indo-Pacific strategy” — Majumdar also co-authored the foreword to Milewski’s report.

In a speech at the dinner, Majumdar said one objective of the strategy includes “advancing the prosperity of our people in new and emerging markets,” adding that “this growth ought to be fueled by Canada’s natural gas” and “our petroleum.”

He is also a backroom political operative with ties to Alberta Premier Jason Kenney. Leaked emails obtained by PressProgress and other media outlets last year show Majumdar was also a central figure in Kenney’s “kamikaze” campaign. 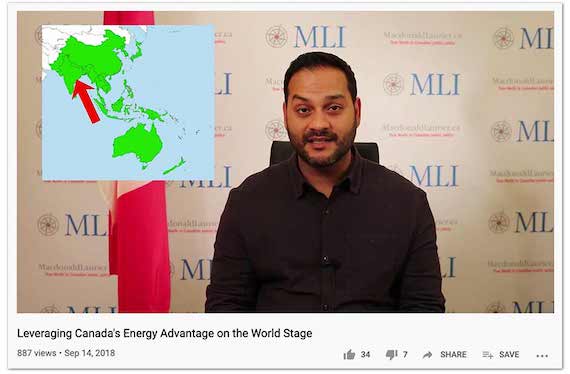 MLI told PressProgress that Majumdar was involved in the production of Milewski’s report.

“Naturally he had some involvement with this report, including communication during the process,” the think tank confirmed.

Shortly after, Harper joined Saskatchewan officials on a trade mission to India. At the time, Harper said his firm would be “working to deepen trade relationships with, and sell more products to, important foreign markets.”

Next door in Alberta, Premier Jason Kenney has also pushed the idea of expanding Canada’s access to Indian markets in order to export oil.

In 2018, Kenney spent a week in India meeting with government officials and business leaders. During his trip, Kenney promoted an article penned by Majumdar promoting the idea of Canada supplying oil to India — the next day, Kenney released a video on Facebook titled “India needs Alberta oil!” that promoted “selling Canadian energy in India.”

In fact, as recently as last week, Kenney came under fire for claiming people in India want Canadian oil so they can “stop burning cow dung” to power their homes.

“(Terry Milewski and MLI) exposes Pakistan for what it is — a super-spreader of terrorism and violence,” tweeted India’s embassy in Canada.

“This radicalization is a danger for all the countries where the so-called Khalistan movement is being pushed by its sponsors,” the Indian embassy in Poland tweeted.

MLI told PressProgress that Milewski’s report was “targeted toward a Canadian audience” but they had no concerns about the Indian government making use of their report for domestic political purposes.

“It is publicly available, and therefore can be shared or commented on by anyone,” Byers said. “We are no more concerned about the Indian government sharing our report than we are about Khalistani advocates doing the same.” 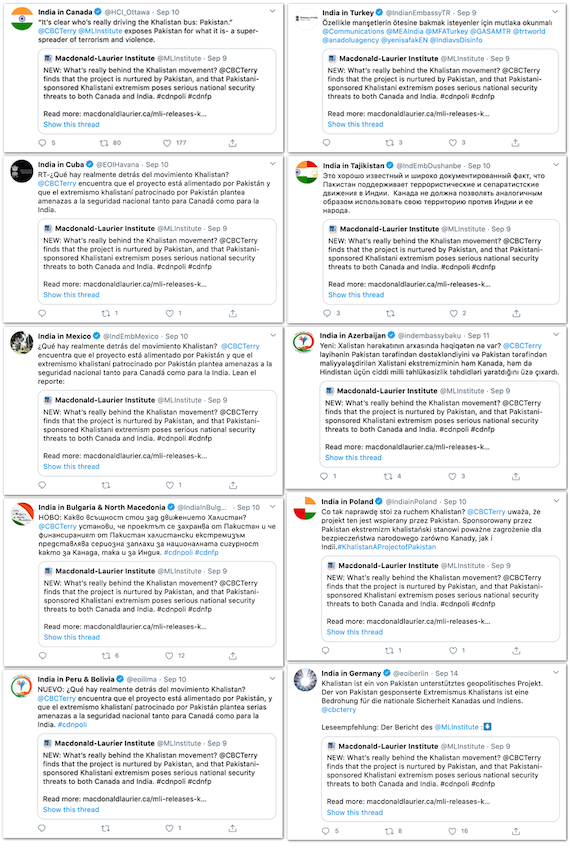 Milewski, for his part, said he doesn’t “feel ‘used’ by the Modi government just because Indian diplomats circulated the article.”

“Every day, governments circulate news stories,” Milewski told PressProgress. “Most journalists are happy for the extra readership. You might equally say I used the Indians, although unwittingly.”

Since publishing his report, Milewski has conducted a number of interviews with Indian media, including the Mumbai-based Republic TV — a news network similar to Fox News that is supportive of Modi’s ruling Bharatiya Janata Party.

On a show called “Blitzkrieg,” hosted by a bombastic retired Indian military officer, Milewski’s report was used to suggest Canada was a hotbed of Sikh extremism.

That allegation has been one reason some Indian officials have, in the recent past, threatened Canada with economic sanctions.

It all leaves some members of Canada’s Sikh community rather baffled.

Harjeet Grewal wonders if his community is being dragged into geopolitical games.

“What is the point of this? It doesn’t really add up,” Grewal said.

“The question any thinking individual should ask is when the Macdonald-Laurier Institute is doing this, aren’t they furthering those same games?”