Amritsar: Sikh personalities holding institutional positions are facing credibility crisis in contemporary times. The credibility of these sections have eroded considerably in past decade or so due to wrongful and unreasonable decisions. These decisions were taken under the undue influence of Badal family which controls Shiromani Akali Dal (Badal) and the Shiromani Gurdwara Prabhandak Committee (SGPC) and these decisions were in clear violation of Pathic tradition.

If we talk about Akal Takht Jathedar, this institutional position still holds due respects in Sikh hearts but persons holding this position in recent times have failed to attract that respect as their conducts falls way short of Pathic expectations.

When five Singh Sahibs led by Giani Gurbachan Singh granted ex-parte pardon to Gurmeet Ram Rahim, the decision was rejected by the Sikh community. The SAD (Badal), Punjab government led by SAD (Badal) and the SGPC was not able to defend this decision, despite the fact that the SGPC spent more than 90 lakh rupees for defending and advertising this decision.

Ultimately SAD (B) had to replace Giani Gurbachan Singh as he was rejected by the Sikh masses.

The Sikh sangat was looking at Giani Harpreet Singh that whether he would order further in depth probe to go beyond the mismanagement narrative forwarded by the SGPC? The Sikh sangat was of the view that the issue was clearly connected with the SAD (B)’s influence over the SGPC and Saroops of Guru Granth Sahib were given to dera and other people in violation of SGPC own norms on the directions of the SAD (B) leaders. But Giani Harpreet Singh endorsed SGPC’s narrative. 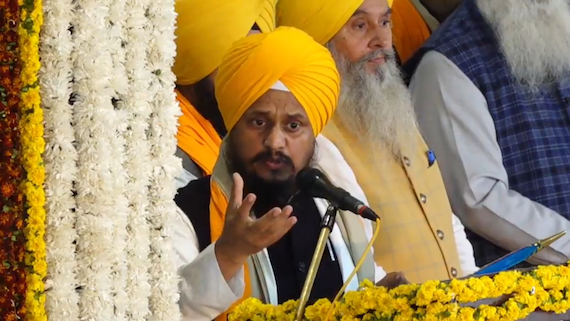 Recently, on 17 November 2020, Giani Harpreet Singh defended his deeds in missing saroops issue, justified SGPC’s role in clash between SGPC task force and some Sikh groups who were holding a protest outside SGPC’s head office and even justified and supported SAD (Badal)’s control over the SGPC. He was speaking during an event held to mark 100 years of establishment of SGPC.

Taking a dig at present incumbent of the Akal Takhat for belittling his august post, the Dal Khalsa said it was painful to note at a function held to mark 100 years of the SGPC that the political authority of the Sikhs was holding the religious authority to ransom. The Sikh organization is of the considered opinion that Badalization of the SGPC has led to denigration of the Sikh institution.

Dal Khalsa president Harpal Singh Cheema said having become subservient to the dominant political leadership of the Akali Dal, Jathedar Harpreet Singh has reduced himself to the level of Dr Daljeet Singh Cheema, spokesman of the SAD (Badal), who is duty bound to defend his party interest.

Interestingly, Jathedar has candidly admitted that the SAD led by Sukhbir Singh Badal is not Panthic as of now when he advised them to begin their journey from Punjab to Panth, said he.

He said the entire show at 100 yrs celebrations was captured by Badal faction entirely giving a miss to splinter Akali groups. As per the Jathedar’s version, the Akali Dal led by Badals is a son of the SGPC, but he remained silent on splinter Akali factions. At least, Jathedar should have acknowledged that they too are sons of the SGPC, so what if they are foster sons, he opined.

Refuting the rhetoric at the function, Cheema said no devout Sikh could cause damage to the Akal Takhat nor could think of destabilising the SGPC.

Instead of pointing fingers towards factions opposing Badals, Jathedar should have applied his mind to find fault lines within Akali Dal and the SGPC, he said.

Analyzing the performance of the present house of the SGPC since 2011, mushrooming of heretical cults, pardoning of dera head, inept handling of sacrilege cases and 328 missing saroops have eclipsed the institution, observed Dal Khalsa leader.

Responding to general perception reiterated by Sukhbir Badal at a function that the SGPC was considered as a Sikh Parliament, he said it never functioned as such and moreover democratic norms are totally missing from its functioning. Ironically, SGPC is run and controlled by a single family, who are not even members of the apex body.