Melbourne: A 35 years old Sikh Woman in Melbourne will be the first one to contest for local government elections in Australia.

Gurinder Kaur, born and raised in Amritsar, represents the South-West ward in Whittlesea council in Victoria. She will be contesting as an independent candidate.

An IT professional, Gurinder moved to Australia in 2006 and has experience of working in private as well as public sector. 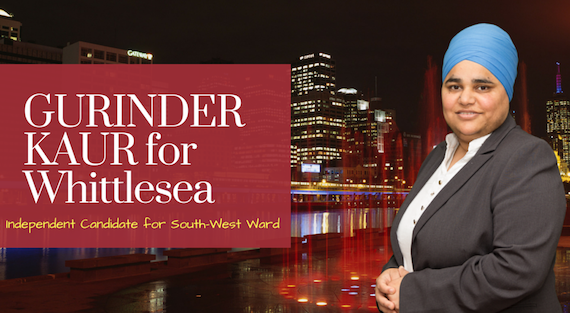 She has been very active in community projects including mentoring refugees to setup small business, fund-raising for Cancer hospitals, Kids camps, crisis support for international students and other local projects.

She is also an independent member of the Victorian Sikh Gurduaras Council in Australia.

She says that [council] is not just about pipes and drains and roads, but about the social things that need to go on in communities.

As an active community member, she knows many of the faces on Whittlesea streets and feels council need to do a lot more for the community.

She’d like to see a library around Wollert, greater safety for residents and small business owners, extension of O’herns Rd and a new secondary college in Epping North.

Whittlesea council has a strong representation from multicultural communities with a rising growth of Indian community in last few years.