Chandigarh: The counting of votes for Lok Sabha elections 2019 was held in Punjab yesterday. Congress won 8 seats, Shiromani Akali Dal (Badal) and its ally Bhartiya Janta Party bagged 2 seats each while the Aam Aadmi Party manage to save 1 seat. In 2014 Congress had won only 3 seats and its tally had rose to 4 after it won Gurdaspur Lok Sabha by-election in 2017. In previous (2014) elections SAD-B and AAP had bagged 4 seats each while BJP had won 2 seats at that time too, but it had lost one of these two was later to the Congress party in 2017 by-election after its Gurdaspur MP Vinod Khanna had died. 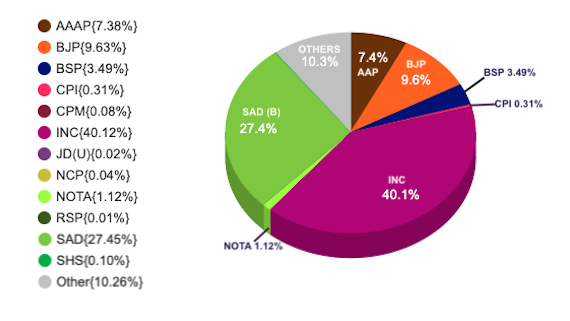 While Aam Aadmi Party has lost its vote share, the Congress party, SAD (B), BJP and Bahujan Samaj Party (BSP) has gained it.

Overall scenario is that the Congress party has benefitted the most from Aam Aadmi Party’s vote share loss in Punjab.