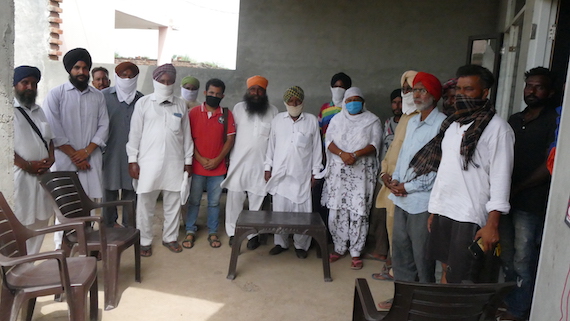 Residents of Village Sekhowala (Ludhiana) held a session of Gram Sabha on July 21, 2020

Gram Sabha resolution further states that the Gram Sabha came to know that B.D.P.O. had got it resolved from Panchyat to agree with Punjab government’s proposal to build industrial park on around 407 acres land of village Panchayat. When asked about this resolution during the Gram Sabha the Sarpanch Amrik Kaur said that she had no information about any such resolution.

She said that Panchayat Secretary had called her and Panchayat members at B.D.P.O. office from where they were taken to DC office. At DC office they were asked to sign on some written proceedings.

Village Sarpanch told the Gram Sabha that when they asked B.D.P.O. about those proceedings, they were told that it was for the welfare of their village. She said trusting the Punjab government officials they signed the document.


The resolution further notes that the entire population of village Sekhowal belongs of Scheduled Caste and the village land was their only mean to earn livelihood. Moreover villagers had fought a long legal better before various courts, including the Supreme Court of India, to get the land registered on the name of village Panchayat. Even the entire village is built on Panchayat land.  Thus, the resolution passed by the Gram Sabha further says, the proposed industrial park poses existential threat to their village.

The resolution says that if the Punjab government and concerned officials fail to according to Gram Sabha resolution then the Gram Sabha will initiate legal/litigation course.