Faridkot: A Special Investigation Team (SIT), probing the Kotkapura and Behbal Kalan police firing of 2015, has nominated former Punjab Director General of Police as an accused in related case registered at Kotakpura city police station in 2018.

The nomination in the case comes days after Sumedh Saini was named as an accused in the Behbal Kalan police firing case.

Two incidents of police firing were reported from Behbal Kalan and Kotakpura in Faridkot on October 14, 2015. 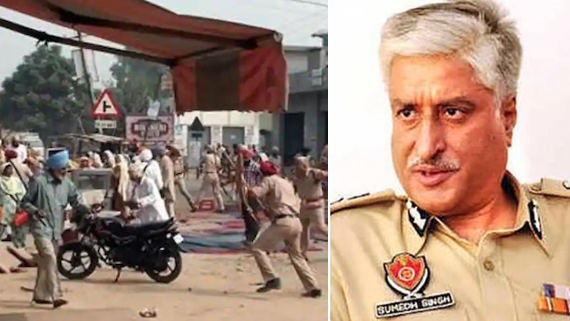 Both incidents were part of police crackdown against Sikh demonstrators, who were on dharna against beadbi of Guru Granth Sahib.

Earlier, last year on May 28, the SIT headed by IG Kunwar Vijay Partap Singh produced a challan in Faridkot Court mentioning the statement of executive magistrate on duty on October 14, 2015 at Kotkapura Chowk, Harjit Singh Sandhu.

“In my considered opinion Paramraj Singh Umranangal, in command at the place of dharna, was visible in taking orders from seniors on telephone and giving orders to the officers present at spot,” as per Sandhu’’s statement.

Challan reads, “Sumedh Singh Saini has been examined by a SIT on February 25, 2019… (he) could not explain how and under what circumstances he deputed Paramraj Singh Umranangal at Kotkapura/Faridkot. The investigations reveals, on the basis of his telephonic conversation with then Punjab CM, Mantar Singh Brar and Paramraj Singh Umranangal, that there was a prior meeting of minds between these persons to use force at Kotkapura and furtherance of that meeting of minds. Overnight force was called from Ludhiana by Paramraj Umranangal.”

A letter dated March 3, 2019 by Punjab DGP office, along with two letters from ADGP security and law & order, reveals that there was no order to depute Paramraj Singh Umranangal to Kotkapura for law and order duty on October 12, 13 and 14, 2015.

“Umranangal had overnight called at least 182 officers from his place of posting (Ludhiana) directly who were first deputed at Kotkapura and later at Behbal Kalan in his own command under the supervision of ADCP Paramjit Singh Pannu, who was otherwise also posted in Ludhiana under him,” reads the challan.

Mantar Brar started receiving calls from Saini at 3:19 am. He received a second call at 3:22 am, which lasted 838 seconds. Saini made last call to Brar after around two-and-a-half hours at 5:59am, which lasted for 537 seconds.

“It is evident that MLA Brar remained busy on the phones since 2 am till the firing took place in the early morning of October 14, 2015. Calls of 838 and 537 seconds duration with then DGP show that both were planning to carry forward the plan of firing and dispersing the people sitting on dharna, which he earlier planned with then Chief Minister Prakash Singh Badal in an illegal and unlawful manner,” reads the challan.

Saini had stated in his reply to Justice Ranjit Singh Commission in 2018 that during the intervening night of October 13 and 14, “I spoke to various officers present at Kotkapura in connection with the law and order situation there. At about 2 am the then CM rung up regarding the situation and the steps being taken, since the issue at Kotkapura was of state concern.”