NEW SOUTH WALES, AUSTRALIA: Following a 24-hour rain period across parched farmland last week, Australian farmers are experiencing a rare occasion for respite amidst a seven-year drought that has ravaged their crops, livestock and means for steady income. In order to survive current conditions, however, economists estimate that weeks of consecutive rain are needed. To support the farmers and their families in their time of need, United Sikhs launched a full-scope relief program that engages stakeholders and elected officials to bolster the local economy long-term. 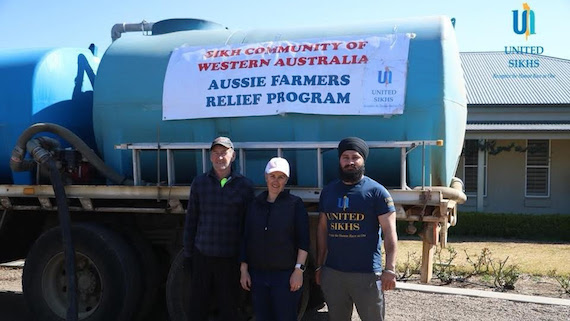 After surveilling more than 60 farm properties, and covering a perimeter of 1,215 kilometers, United Sikhs adopted the towns of Loomberah and Tamworth for drought relief assistance. Volunteers are presently supplying water tanks and food supply to farmers in these regions through its Aussie Farmers Relief Program.

“Our goal is to continue helping these farmers do what they do best — thrive as stewards of the land,” said Gurvinder Singh Madaan, United Sikhs Aid Director.

“Despite receiving record rainfall last week in some regions, farmland across the continent is in such a severe state that crop production could be cut by 50 percent or more in some regions. This could mean famine and long-term health effects, including life-threatening conditions, for many farmers and their families. Our aid program is crucial for sustaining a thriving economy and state of well-being for both farmers and the greater community.”

The state government has reported the lowest rain falls this year, with some communities getting at most 16 millimeters in the last six decades. Last month marked the driest September ever for the entire continent. As part of the relief program, United Sikhs is advocating for strategic long-term solutions with government representatives. The organization will continue to survey and identify additional towns needing support for the next phase of relief assistance.

To date, United Sikhs have organized trucks to serve multiple loads of 13,000 liters of water to more than 30 farming families in Loomberah and Tamworth in New South Wales with support from the Sikh community of Australia, notes the release.