Recently the Govt. of India banned Punjabi movie Kaum De Heere. It was a big news in Indian newspapers. I’ll like to share some of the comments I wrote on Times of India website and some of my counter comments in reply to some of the other people making comments. I hope you’ll find them interesting. 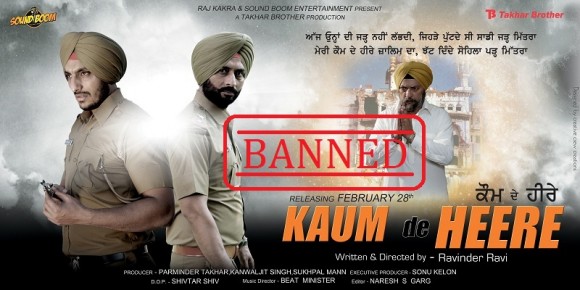 It clearly proves that Indian Govt. doesn’t want public to know the facts about innocent killings and destruction of Darbar Sahib (Amritsar) complex. Indira Gandhi was punished for her misuse of army and killing of thousands of innocent persons. In Indian history and Hindu mythology there are many Devi/Devtas who are worshiped for killing the bad rulers of their times. In recent times Shaheed Udham Singh killed O’dware to punish him for killing hundreds of innocent persons in Jallianwala Bagh 1919 tragedy. Similarly Beant Singh and Satwant Singh sacrificed their lives to punish bad ruler Indira Gandhi. And they’ll always be considered Kaum De Heere. Govt. of India can’t hide these facts.

Censor board found the movie telling the truth about November 1984 and innocent killings very disturbing. If Censor boards finds the movie very disturbing then can imagine how victim families were feeling when thousands of innocent persons were being killed, women were being raped and properties were being looted and burned? The ruling Congress Govt. led by Rajeev Gandhi had planned, organized and executed the 1984 Sikh Genocide. And so far in 30 years the ruling Govts. haven’t provided any Justice to the victim families and punished the guilty persons. And the Govt. still doesn’t want the general public to know the truth and facts about 1984 Sikh Genocide. Shame on the ruling Govts, Justice system and Censor board.

Everybody is putting emphasis that bodyguards shouldn’t have killed the person they were guarding. But how about a PM who misused the army to attack a religious place and kill thousands of innocent worshipers? Isn’t the PM supposed to care for country’s citizens? How many such bad rulers have been punished by Devi/Devtas in Hindu mythology? In recent times Indira and Rajeev Gandhi are the two bad rulers who had misused their powers and killed thousands of innocent Sikhs and Tamils. And both bad rulers were punished for their crimes.

Indira Gandhi made fool of the whole country and Media etc. and made them believe that she didn’t really wanted to attack the Darbar Sahib (Amritsar) but had to do this because of the (so-called) “terrorists” in there. For your information according to Lt. Gen. Sinha she had asked army to start planning and preparing to attack the Darbar Sahib (Amritsar) 18 months earlier when Sant Bhindrawale wasn’t even in the Darbar Sahib (Amritsar) and the (so-called) terrorism wasn’t very big serious problem that required army action. Too bad the Public, Media, Justice system etc. have never questioned why Indira Gandhi had started planning this army attack? Lt. Gen. Sinha was supposed to be the next army Chief but because he was against attacking the Darbar Sahib (Amritsar), Indira Gandhi bypassed senior Sinha and appointed junior Vaidya as army Chief because he agreed to follow her orders. Later on Indira Gandhi let things worsen in Punjab and even used Black cat agents to act as Sikh militants and kill innocent persons especially Hindus to justify her army attack and kill thousands of innocent. Too bad the Media, Politicians, Justice system etc. have ignored and hidden these facts and never let the general public know the truth. The […] Indira Gandhi had made fools of general public and media etc. and made them believe that she was the Durga Mata and did all this to protect the nation. But the fact is she planned all this to get Hindu majority votes in the next elections. But the […] was punished for her crimes and innocent killings by these great Kaum De Heere. Too bad the Govt. still doesn’t want the public to know the truth.

The sad thing is that whenever Sikhs raise voice against Blue Star Operation, innocent killing and atrocities then they are quickly labelled as Khalistani and terrorists etc. And nobody wants to use the brain to think that Indira Gandhi could be wrong. Don’t forget that Indira Gandhi was the one who disobeyed High Court decision, violated the constitution, imposed Emergency and made hundreds of thousand people suffer in jails. That same Indira Gandhi attacked the Darbar Sahib (Amritsar) on a very religious day with thousands of innocent worshipers in there. She had ulterior motives to be called Durga Mata and get Hindu majority votes in the next elections. Otherwise according to Govt. Figures there were approx. 200 so-called terrorists in there. How big threat those 200 persons all surrounded by army and tanks could be to country’s security? The army Generals wanted to cut power, water, food supplies and give chance to innocent worshipers to come out and even the armed persons to surrender peacefully. But Indira Gandhi overruled them and didn’t care for innocent worshipers and even hundreds of army men killed or injured in the operation. Indian media and people still don’t want to question the wrong decisions of Indira Gandhi because thousands of innocent lives lost were those of Sikhs. When will people and media etc. will have the guts to really blame the real “Devil” person guilty of killing thousands of innocent persons?

Shame on such people full of hate for Sikhs. Don’t forget that Sikhs fought against Mogul empire and saved lives and honour of thousands of Hindu ladies being taken away by Mogul forces. Even against the British, 85% of the freedom fighters who gave up their lives were Sikhs. Majority of army men who gave up their lives defending borders against the China and Pakistan were Sikhs. Still prejudiced persons like you are coming up with such comments full of hate against Sikhs and feel great to have killed thousands of innocent Sikhs with Govt. support in 1984 Sikh Genocide. Shame on such racially prejudiced persons.