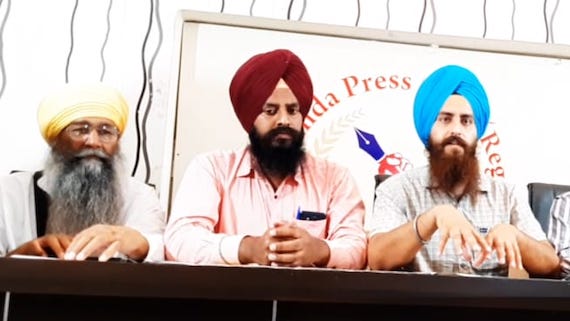 Addressing the press conference here today, they said ever since, the BJP under Narendra Modi has occupied the country’s seat of power, there were desperate attempts by pseudo-patriots and Hindutva elements to convert India into Hindu rashtra”. Referring to Defence minister Rajnath Singh performing Shastra Puja to mark the occasion of Vijayadashami and writing OM on the jet after receiving the first of the 36 Rafale jets in the France, they said it looks the BJP has in practice started functioning as Govt of Hindu state. They sought explanation from Shiromani Akali Dal (Badal), who is an ally of the BJP on the matter accusing Badals for mortgaging Sikh interests to Hindutva forces.

Rubbishing the RSS chief Mohan Bhagwat’s utterances that all those who are inhabitants of India are Hindus, the Dal Khalsa today reaffirmed that Sikhs were neither Hindus nor were they followers of Indian culture.

Rejecting RSS theory of “one nation, one culture”, the organization categorically stated that there were many nationalities living in India that have different cultures, histories, traditions and way of life.

Notably, Mohan Bhagwat, while speaking at Nagpur on Dussehra has remarked that “India is a Hindu rashtra and every person residing in Hindustan is a Hindu”.

Meanwhile, Sikh Youth of Punjab announced the holding of a conference at Bargarhi on Oct 14 to mark the death anniversary of Krishan Bhagwan Singh and Gurjit Singh, who fell to police bullets on Oct 14, 2015 at Behbal Kalan.

Accompanied by Sukhraj Singh, son of Krishan Bhagwan Singh, SYP head Paramjeet Singh Mand said past and present Govt of SAD (Badal) and Congress respectively has played with Sikh emotions and justice. From Bargarhi to Behbal Kalan incident and from Police to CBI everyone has had a role to sabotage the Justice. Victims son Sukhraj appealed to justice seekers, rights activists and Panthic bodies to gather at Bargarhi on 14th to pay homage to martyrs of the faith.