Chandigarh: Aam Aadmi Party government in Punjab is raising hurdles in the way of release of Sikh political prisoners. On the one hand AAP leaders maintain in their public speeches that their government is in favor of release of Sikh political prisoners who have completed minimum mandatory terms of their sentences, but on the other hand Punjab government through District Magistrate of Patiala did not recommend permanent release of Bhai Gurmeet Singh. Bhai Gurmeet Singh is undergoing imprisonment for life and he has completed the minimum mandatory term of his sentence. Advocate Jaspal Singh Manjpur told Sikh Siyasat News (SSN) over phone that in response to a writ petition filed in Punjab and Haryana High Court on behalf of Bhai Gurmeet Singh, Chandigarh administration told the court that it has dismissed the case of permanent release of Bhai Gurmeet Singh as Patiala DM did not recommend his release. 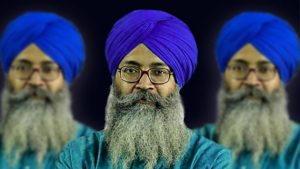 It is notable that Bhai Gurmeet Singh was sentenced to imprisonment for life in a case falling under the jurisdiction of Chandigarh administration and Patiala is his hometown where he spends his parole.