What is India Hiding from World under Buzz Word ‘Khalistan’?

Secrecy and silence are perpetrators’ first line of defence if secrecy fails, the perpetrators attack the credibility of the victims. If they cannot silence victims absolutely, then they try to make sure no one listens. To this end, they marshal an impressive array of arguments from the most blatant denial, to the most sophisticated and elegant rationalisation.After every atrocity one can expect to hear the same predictable excuses- it never happened, victims are lying, the victims are exaggerating, the victims brought this upon themselves and in any case it is time to forget the past and move on.

Jagmeet Singh, the current President of the New Democratic Party (NDP) in Canada was rewarded with a visa denial to India for mere being vocal on human rights abuses in India and on Sikh issues. He had moved a motion of Sikh Genocide in 2016 which did not succeed and later in 2017 another Sikh MPP Harinder Malhi was successful in moving a successful motion recognising the fact of “Sikh Genocide 1984” but India rejected it even after being openly admitted by Home minister Rajnath Singh that it was ‘Genocide’ and Nanavati commission concluded that “all this could not have happened [in November 1984] if it was merely a spontaneous reaction of the angry public. The systematic manner in which the Sikhs were thus killed indicate that the attacks on them were organized.”. India’s consular services in Canada was seen exerting pressure on Canada’s Ontario legislature with economic threats on issue of declaring massacres of the Sikhs in 1984 as “Genocide”. 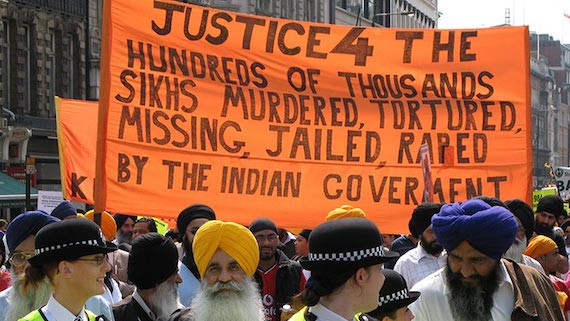 During the Sikh Genocide 1984, around five thousand Sikhs were killed in Delhi alone. Sikh men were burnt alive, women were gang-raped, Sikh houses and businesses were reduced to ashes and all this was done with impunity and state patronage.

India’s track record of human rights in Punjab is even worse. The Punjab Documentation and Advocacy Project (PDAP), have found over eight thousand people had gone “disappeared” during 1980 till 1995 in Punjab and demanded an independent judicial commission to probe the matter. Satnam Singh Bains, representing PDAP, claimed that they have identified and documented hundreds of victims of enforced disappearances and extrajudicial killings who were killed in “fake encounters” and “cremated as unclaimed unidentified”. “In our seven-year long investigation, we have identified 8,257 persons from different sources who disappeared from 1980 to 1995 in Punjab,” he said. Sub-Inspector of Police Surjit Singh, who confessed to have killed more than 80 people in fake encounters, has approached the Punjab and Haryana High Court seeking protection from senior officers who are trying to prevent him from making an “confession.”

The systematic, organised and widespread practise of enforced disappearances, fake encounters, extra-judicial killings and secret cremations was unearthed by human rights activist Jaswant Singh Khalra, who is recognised as “International Defender of Human Rights” by Amnesty International. Jaswant Singh Khalra was himself killed by the Indian police officials for exposing ‘crimes against humanity’ that were being committed in Punjab.

Despite being victims of a state sponsored genocide themselves, Sikhs continue to speak against the atrocities other minorities also- including Muslims, Dalits, Christians and other struggling nations of the Indian peninsula and their constant expose of India’s human right abuses is what hurting India the most.

The recent restrictions on diplomats and Hindutva outfits like RSS, Bajrang Dal, Shiv Sena from using stages of Gurdwaras for their anti-Sikh propaganda got headlines worldwide and that further irked the Indian State. The Air India bombing case if gets reopened, India might feel more heat on world platform as the book “Soft Target” written by Brian McAndrew and Zuhair Kashmeri has already exposed the episode, advocating that the bombing of Air India Flight 182 was the work of Indian intelligence agencies as part of a governmental anti-Sikh propaganda campaign and Indian government immediately banned this book in India.

The recent trip of Canadian Prime Minister Justin Trudeau and Canadian Sikh ministers to India has exposed the independence of Indian Media which fabricated controversies during the entire trip of Canadian delegation. The fear of getting exposed worldwide on Sikh genocide and seeing Sikhs flourishing with their pride, made Indian state to change policy for Canada which believes in diversity and dissent and on contrary India likes to suppress the voices of vocal Sikhs demanding justice which India can’t afford at any cost.

India is currently being ruled by BJP/RSS led by Narendra modi who was banned by USA government for 12 years for his role in Gujarat carnage (2002) and being RSS affiliate which was thrice banned in India.

Khalistan issue was core around which Trudeau’s trip was made to revolved, but their is very basic difference how India and west see this- the separatism in Canada is considered as right to self determination and Canada had itself held referendums for Quebec which wanted to form separate country but here in India it is labelled as “terrorism” and yes there are Sikhs demanding the Khalistan and Hindus including the patrons of current government demanding Hindu Rashtra but only former are labelled as “terrorists”. Irony!