Lucknow: As per the media reports a senior Indian Police Service (IPS) officer equivalent to Director General of Police (DGP) of Uttar Pradesh Police has kicked up a controversy by taking a ‘pro-hindutva’ pledge for ‘the early construction of Ram temple’ in Ayodhya, backing  the agenda of ‘Hindutva’ forces active in the sub-continent. 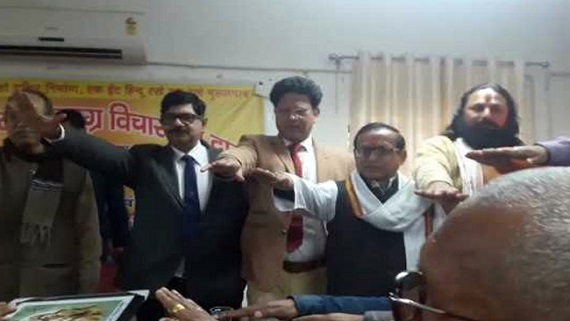 Senior UP police officer Surya Kumar Shukla (left) claims his pledge at the event has been misunderstood.

DGP (home guards) Surya Kumar Shukla, a 1982 batch officer, allegedly took the pledge at an event organised by Akhil Bharatiya Samagra Vichar Manch at a private event on the Lucknow University campus January 28. A video of the event that was widely shared on social media shows Surya Kumar Shukla taking a pledge with others for the “early construction of Ram temple in Ayodhya”.

Surya Kumar Shukla and others can be seen in the reported video  saying, “Hum sab Ram-bhakt, aaj ke karyakram ke dauraan, yeh sankalp letey hain, ki jald se jald Ram mandir ka bhavya nirman ho (We all Ramdevotees, at this event, pledge for the early construction of Ram temple)”. It is said by the media sources that the state home department has asked an explanation from the officer in dispute.

Whilst interacting with the local news agencies, Surya Kumar Shukla stated that ” his words were misinterpreted.”

“It was an ‘intellectual gathering’ where people from Hindu and Muslim communities were present… The pledge was for the peaceful and harmonious solution of the problem,” he claimed.

“There has been a misinterpretation. I had clearly said Ram Mandir issue is sub-judice, it won’t be appropriate to speak on it. The pledge was for communal harmony.”

Meanwhile, distancing itself from ‘pro-hindutva’ agenda the IPS association has reportedly said on twitter that “We disassociate ourselves from the act of a senior #IPS officer as shown in the video & reiterate that it is against the ethos of neutrality, fairness and uprightness that Indian Police Service stands for.”